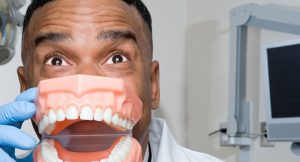 For as long as humans have had teeth, they’ve had cavities. And those cavities required care even if it was primitive.

Recently, scientists discovered 14,000-year-old evidence of cavity treatment. A large hole was originally mistaken as a severe cavity but turned out to be the work of stone tools used to scrape away tooth decay.

Take a look at how cavity treatment evolved through the years:

7000 BC – Eleven molars show evidence of early drilling, most likely conducted with a flint drill bit and bow-drill.

500 – 300 BC – Written text from Hippocrates and Aristotle describes extracting rotten teeth with forceps.

80 BC –Egyptians “pack” teeth with linen and medicine to prevent particles from getting into the cavity.

166 – 201 AD – Etruscans had primitive gold crowns as dental prosthetics for the upper class.

Although the work was rough, these ancient dentists mimicked the handiwork of their predecessors. Modern dentistry also treats cavities by removing decayed areas of a tooth… fortunately we have the luxury of sterile tools, numbing agents, and advanced fillings materials.